A Year of Uncertainty, Hope, and Triumph 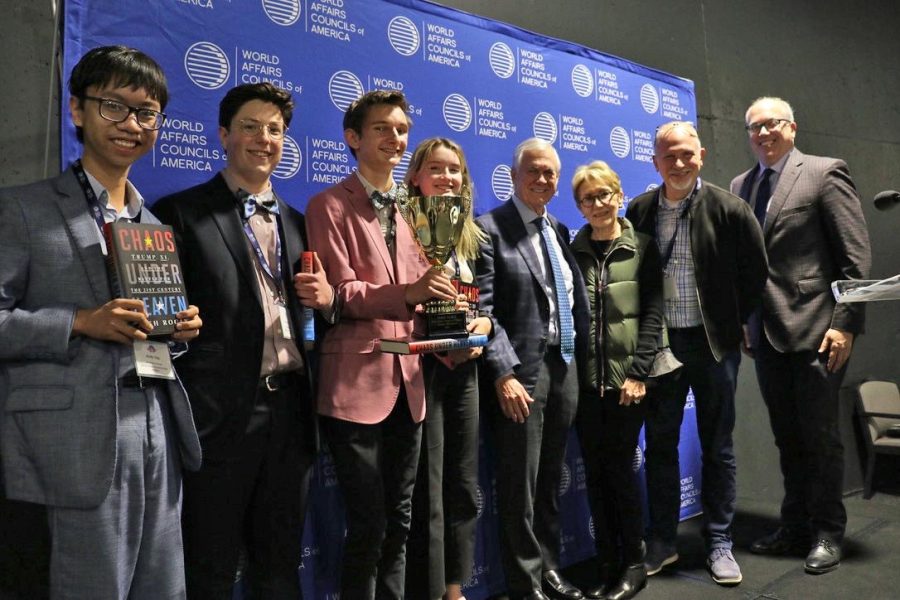 Another school year has reached its close. We’re sharing our final farewells with graduating seniors, classes are creeping along at a snail’s pace. South Texas weather veers into the balmy domain of summer, and the long, electric months of fall and winter now blur. Sleepless nights and anxious mornings, rushed essays and tedious exams linger as ghosts do—as vague impressions whose distinct purposes have faded and merged, melted under the descending heat of spring. In mid-May—just as the campus’ catalysis sputters, but well before the spirit of break takes effect—I’m left mulling over the year now behind me, and upon the project whose influence endures, a carbon-copied hue, in the catalog of 2021-2022: Academic WorldQuest.

Scrutinize dozens of papers on global affairs. Memorize thousands of statistics from wars, from famines, from hurricanes. Make note of the equestrian school South Korean President Park Geun-hye’s friend’s daughter hoped to attend. How many African countries lie in coastal regions? Was it 37 or 38? For twelve consecutive years, Keystone has brought home the WorldQuest regional championship—a title whose preservation has proven both a source of stress and of inspiration. Over the course of a dozen seasons, four-student teams from Keystone have convened with counterparts from schools across the city. Each year, we’ve been drilled on 100 geopolitical trivia questions, been scored on our performance, and emerged as San Antonio’s representatives on the national level. The peculiarity of this season, though, is owed to a greater, entirely unpredictable success. Against all odds, our rag-tag team of MUN wonks flew home from the national conference in DC with a glistening first-place trophy.

In August, Jack Dougherty and I began the season as half a team. Over the past few years, the club had shrunk from a dozen members to just two—a number insufficient to send even a single team to competition. We’d lost our stalwart coach, Mr. Boryczka, to retirement, weathered a global pandemic which—among the most minor of its consequences—made club promotion infeasible, and saw the entirety of our varsity team graduate in one fell swoop. Our prospects were, to say the least, dim. In those early autumn weeks, it seemed unlikely we would reach quorum, let alone stand a fighting chance at defending our regional AWQ cup. Endlessly committing global affairs facts to memory, it appears, isn’t an attractive prospect for most.

If it weren’t for the praiseworthy commitment of Andy Ngũ and the stirring zeal of Julia Doski, both of whom buoyed the sinking raft which was Keystone’s Academic WorldQuest program, we surely would have faced defeat by inaction. When few others saw promise in our cause, these first-time members took up the burden of the club’s legacy. So, without a coach, without a back-up team, and with limited experience at competition, we charged ahead—Jack as our cautious leader, me our overly-confident “vet,” Andy our sober powerhouse, and Julia our diligent visionary.

The following months were passed with weekly meetings, seasons revolving around our picnic table like the hands of a stopwatch, counting down the days until competition. Quizzing each other on our respective fields of specialization (from foreign intervention in Afghanistan, to the digital evolution of global currencies), we slowly accrued a wealth of foreign affairs trivia—while wasting a great deal of time in the process. Indeed, we studied endlessly, but when weariness proved inescapable, we jested deliriously about political advertisements, presented nonsensical practice questions; we debated the quality of leftover pizza, and facetiously visualized our impending success. Nevertheless, the warmth, the security of September fluttered away with the chilling winds of uncertainty. Would our collective knowledge suffice? Could we maintain Keystone’s legacy? Far too soon, February was upon us.

On a bright Tuesday morning mid-month, we heaved our champion’s trophy out of the front office, sure that we’d soon be handing it off to another school. The four of us boarded a bus with Mr. Tijerina, bursting with silent anxiety, and made our way toward UIW. The conference center teemed with confident debate-team kids, with vociferous coaches booming out review questions—we, on the other hand, entered and sat quietly at table #1, a looming reminder of our club’s fragile legacy. The rest of the day’s proceedings are a fuzzy deluge of frantic, hushed discussion. Scores of questions flashed before our eyes, hour after hour. Read the prompt—quickly. Talk it over—quickly. Write an answer—quickly. Next question.

Though we’d kept track of our score throughout the competition, the team was doubtful. We hadn’t met our target, and we hadn’t reached the victory threshold of previous years. By the conference’s conclusion, we had, for the most part, resigned ourselves to defeat. The team slouched, tapped their feet, and waited.

Armen Babajanian, CEO of the San Antonio World Affairs Council, stepped up to the podium. He announced the third place score, then the second. We realized, stunned beyond intelligible speech, that we’d won—preserving Keystone’s regional streak for a twelfth year. From there, the crew was off to DC.

Wake up at 4:00 AM. Drive to the airport. Study on the plane, study during the car ride into DC, study before dinner, study during and after dinner. Eat a whole tin of mints. Study, study in bed. Try to sleep, fail to sleep. Study on the bus to the conference center. Compete.

I still recall the precise moment when I first thought hey, we might actually have a shot at winning this thing, though I kept that fleeting sense of confidence to myself. The group had found a quiet, secluded study spot on the second-floor mezzanine of our hotel—the sort where you can peer over the entire lobby. Rather than sight-seeing, or watching television, or socializing, we unanimously elected to sit in silence and read. That close to the competition, the impact of cram studying was dubious, but the level of commitment I observed among my team members spoke volumes. While our competitors had “fun” on the ground floor below, we Keystone students worked.

The competition, with much added pomp and circumstance, proceeded much like the regional competition. Forty-some teams from across the country, from Hawaii to Massachusetts, sat sternly, rummaging through notes, whispering amongst themselves. Perhaps 200 students, donning neatly-pressed suits and dresses, formed an ocean of palpable tension. A hush fell over the US Institute of Peace conference center as rapid-fire questions flashed before our eyes and the announcer’s voice echoed throughout. Hour after hour of frantic discussion and answer-scribbling passed—our sights lowering with each question missed. We entered unsure of our prospects, and finished with hopes of placing in the top ten. Needless to say, we were incorrect in our predictions.

When all was said and done, as in San Antonio, a man in a gray suit ascended to the podium, called out third place, called out second place, and called out “Keystone.” We erupted with excitement. In a word, our triumph was surreal—in the way that stumbling upon a chest of diamonds might feel. Although we had studied for months, poured hundreds of hours into the pursuit of success, it was difficult to comprehend that we had earned the achievement, not simply happened upon it by chance. That—that sense of pride was unparalleled. We felt it not only for ourselves, but for each other. This moment proved the greatest vindication of a favorite Franklin Roosevelt quote: “I’m not the smartest fellow in the world, but I sure can pick smart colleagues.” To them, I am forever grateful.

The night of our victory, the four of us crowded around a table in a DC osteria. We shared stories from our time at Keystone, receiving and imparting advice—sage skills in surviving four years of high school. Though we laughed and joked, I felt an immediate veil of nostalgia drift over us. While the rebirth of Keystone’s WorldQuest team had just begun, several threads were also drawing to a close. Jack, an individual who has served as a passionate, wise and caring leader at the Keynote, Model UN, Debate, and WorldQuest would soon be departing for Georgetown; months of momentum, of team-building, of note-taking had come to an abrupt (albeit victorious) halt; and, just over the horizon, Andy and I would soon be graduating ourselves.

Yes, seasons end. Trophies are doled out. People come and go. What makes our story unique, though, is that it embodies far more than Keystone’s competitive spirit. Awards, they’re transient. Ideas are forever. The bonds that we formed, through late nights and through early mornings, times both serious and foolish, through doubt and through success, will never truly fade. In our own scrappy, slapdash way, we founded a new club—based on a new legacy: with enough heart, enough cooperation, and with a dash of luck, Keystone students can achieve anything, no matter the odds.