Dusty koalas on the side of the road; singed kangaroos, alone in barren fields. Blood-red flames melting into the sky. Orange smoke rising, trees dying. Weeping wasteland. Killer flames, too hungry to be stopped.

These environmental activists have strong reason to be concerned; beginning on the 11th of November, 2019, fires have raged across every Australian state. The worst drought Australia has seen in decades has led to record-high temperatures, generating a perfect breeding ground for fires. In addition to the drought, lightning and human activity have led to the burning of 7.3 million hectares (California’s 2019 fires totaled a loss of 100,000 hectares) and 3,000 homes. The total estimated animal losses are between 0.5-1 billion. There’s no end in sight, and it’s all the more frightful knowing that January and February are the country’s hottest months. 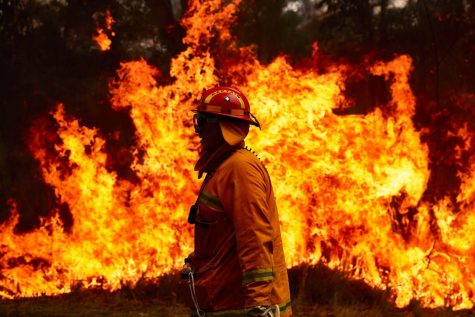 The appalling numbers don’t end. Twenty-eight humans have died at the hands of the treacherous flames. Tragically, on January 24th, three American firefighters were killed. One of them, Paul Clyde Hudson, was a San Antonio native and had attended Keystone before transferring to Alamo Heights High School.

These monstrous fires turned the actions of a few activists into a strong environmental movement supported by the majority of the country. Thus, the independent climate organization, the Climate Council, was created. This organization, supported by fire chiefs from every state, demanded action. They were faced by fierce opposition though, seeing as Australia is the world’s largest coal exporter. The coal mining industry and politics are alarmingly intertwined, with the majority of former politicians joining that industry after retiring. These “coal loving” politicians of Prime Minister Scott Morrison can no longer ignore their demands. Real change is happening—it’s just sad that it came at this heartbreaking cost.