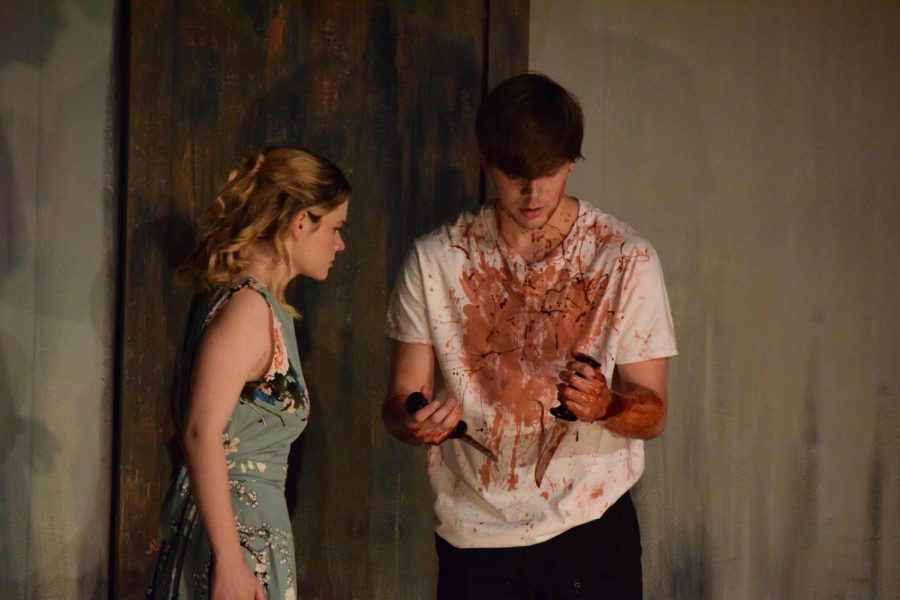 Nothing can summarize Shakespeare’s Macbeth and Keystone’s recent suspenseful and exciting production of the show better than the Bard’s own words. Hailed as one of the upper school’s best productions in recent years, the fall show transported actors and audiences to a radically different plane of intensity, emotion, and spectacle for all the senses. The heightened focus on stage, backstage, and among the audience was palpable as a cast of twelve, supported by crew members and director, Mr. C, embarked upon the murderous journey of Macbeth and Lady Macbeth’s royal ambition. One audience member sings praises of the show: “The production was very professional and well done…and the actors and actresses performed Shakespeare beautifully.”

The characters are the heart of any show, and Shakespeare’s fundamentally human characters are already relatable on the page: their ambitions, flaws, motivations, and triumphs. But it takes a special group of people to truly bring them to life. The cast and crew of Macbeth created something unique and real to a degree rarely before experienced. Emma Guy-Bishel, who played Ross, says “I felt like I was part of something unique.” Perhaps the most unique element of Macbeth was the level of investment from everyone involved. The devotion, time, and emotion put into the show was impressive, and actors were willing to take risks and make bold choices to create their characters: “My throat hurt,” remarked Celeste Robertson, whose murder scream as Lady Macduff shook audiences to the core.

It was nothing like I’ve ever been part of at Keystone: a selfless level of commitment and excitement to show audiences what months of rehearsal had culminated in. Backstage is usually a very laid back environment for jokes and a break while not on stage. However, during Macbeth, the backstage became an extension of the intensity of the world on stage. Thankfully, there were no method actors, but there was a heightened sense of focus that contributed immensely to airtight performances that Macbeth, with such a heavy, quickly-moving plot, requires. For the first time, it felt like we were able to hold audiences with us on stage, with audible reactions to the appearance of Banquo’s ghost after intermission. At the end of the show, there was a palpable release of tension and emotion that signaled a job well-done during the curtain call.

Of course, Macbeth lends itself to a unique level of spectacle as a show chockablock with murder, ghosts, blood, and witches. The crew and technical elements were as important as the acting. “I love lights,” says Jada Young, lightboard operator, and so did audiences. The ominous, dark tones of the play were accentuated through stark lighting with footlights, side lights, spotlight use, and the simultaneous second show put on by the actors’ shadows behind them. However, behind all the spectacle and hard work, Macbeth was carried by a dedicated and talented group of individuals who came together to tell a story and give audiences (and themselves) an experience like no other.