A Drum, a Smirk, and a Moral Panic: The Problems of Corporate Journalism 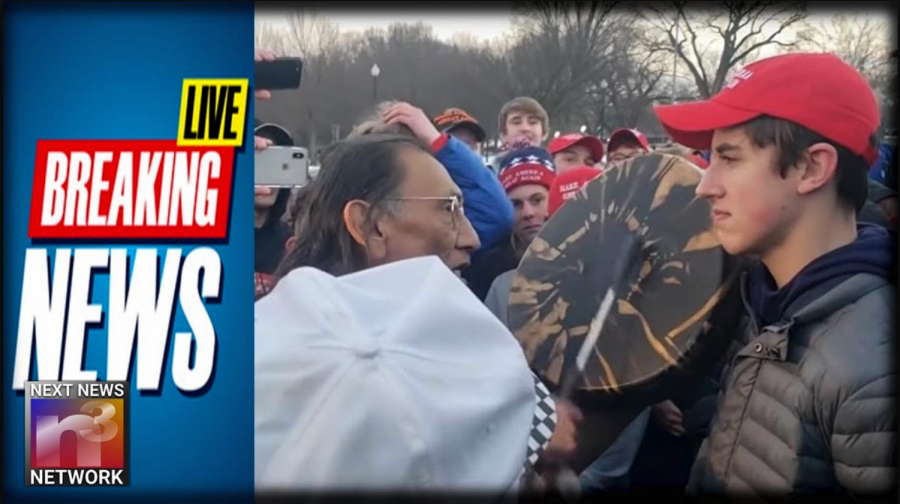 I’m sure we’ve all seen or at least heard of the “MAGA Kids” video rapidly circulating around the web and mainstream news networks.  For those out of the loop, the footage shows a white teenager* surrounded by schoolmates grinning at a Native American beating a drum directly in front of him.  Later film revealed the events prior to the stare down, where protesters shouted a variety of extremely harmful racial slurs that have no place in a school paper.  Some liberals and conservatives have turned these few minutes of video into a cultural battleground, with leftists decrying the student’s “white privilege” and conservatives asserting that the students weren’t the aggressors and were instead provoked by the incendiary calls from the other side. Although I have my own thoughts on who was right and wrong, I’m not writing to discuss them.  I don’t believe this issue should’ve received any major coverage at all.

This issue is minute compared to the far more grave current events that have been relegated to the sidelines.  To start, another American soldier lost his life in Afghanistan the day this opinion was written. North Korea continues to develop its nuclear weapon program.  Global warming continues to worsen, with Antarctic sea ice continuing to decrease rapidly since 2016.

Yet, rather than discuss these major issues, all of which will have real, devastating consequences to the American people at large, the media brings in the microscope to analyze every aspect of this tiny, completely nonviolent, mostly harmless confrontation.  I’m not excusing the actions of the individuals involved; I’m saying this issue is not of national importance.

Worse, the coverage is deeply indicative of a larger problem in American society: the media’s role in polarizing the American people.  Our media, with six companies owning over 90% of what Americans watch and listen to, is motivated by profit above all else. Humans are inherently attracted to everything this protest represents: tribalism, conflict, fear.  Humans love picking sides, creating groups, and fighting, especially online. Thus, the media has tailored their coverage of this protest to exploit these natural cravings and drive clicks and views, resulting in more site traffic and advertising revenue.

American mainstream media on both sides of the spectrum has continually exploited these instincts for decades.  Look to the trademark yellow journalism of the Spanish-American War, in which the sinking of the USS Maine triggered a hyper-aggressive, jingoistic response from an American people fueled by a story-hungry press for a historical example. However, our twenty-four-hour news cycle has allowed the media to harness and profit off of our basic instincts to a degree unseen in American history.  And, while I’m as in favor of the free market as the next capitalist-minded American, one would have to be blind not to see the drastic effects of such coverage. The media’s constant portrayal of American society through the lens of internal conflict, whether that conflict be based on race, gender, class, or ability, has done more to divide us than any inflammatory speech or poorly-worded tweet.

I’m not of the “fake news” crowd, and I fully acknowledge that there exist many capable, honest journalists in the profession.  But, whether it be the fault of editorial or corporate policy, the most profitable, and therefore the most sensational, divisive stories make it to the headlines.  If we are to avoid further division along arbitrary lines, the media’s rush for profit must be coupled with a sense of civic responsibility The media’s coverage of American current events has recently made it harder and harder to be a simple American in an era of politicized black-and-white.

This year, Martin Luther King Jr. Day will not be remembered for the millions of Americans of all colors and creeds who united in marching for the late reverend’s dream.  Instead, we will recall the unnecessary division created by over coverage of a smirk and the political firefight that came from it.

*The author of this opinion wishes it to be known that the choice to omit the white teenager’s name was deliberate, for he doesn’t feel comfortable printing the name of a minor.